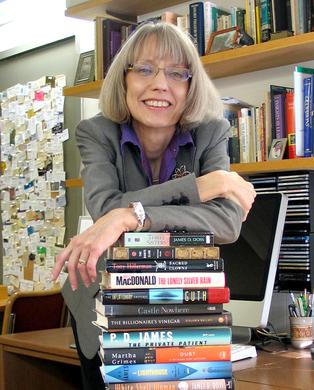 Linda Wirtanen Fitzgerald was born in
​the upper peninsula (better known as the UP) and raised in the northern reaches of Michigan and Wisconsin. After graduating from Northern Michigan University, she headed to Ann Arbor and a graduate fellowship at the University of Michigan. Several years later, with master’s degree in hand and no job prospects in sight, she took herself on a self-guided tour of Europe—ultimately producing a travel article that earned her half a page in The New York Times’ travel section and fueled brief hopes of a meteoric literary career.

Within a few years, she had tried her hand at magazine editing, newspaper reporting, even script writing for sales seminars—and consoled herself in off hours by devouring mystery novels. She finally found her professional home as senior copywriter in an ad agency. (And after all, wasn’t that how Dorothy Sayers started?) Five years later, she launched Fitzgerald Communications—an Ann Arbor-based copywriting and consulting firm serving clients in business, industry, health care, academia, and the nonprofit sector.

Over the years, Linda has produced thousands of projects in digital and print media. But one career goal eluded her: she had never written a mystery novel. In the summer of 2016, she crossed that item off her life list with the publication of Death at the Doorstep—the first book in a trilogy that chronicles the adventures of Ann Arbor freelance writer Karin Niemi.